(Notes on the works)
Vincent Pecoil

Column Shred is composed of strips of printed paper representing Doric columns; their bases appear to have been fed directly through a paper shredder. It is as if they have taken a shortcut in the contemporary industrial recycling process: no sooner printed than destroyed. There is a contrast between these paper printouts and the bulky mass of the columns, of which they are merely the image. Solid, millennia-old relics on the one hand, ephemeral traces of a dematerialized archive destined to disappear rapidly on the other.

We speak about ‘styles’ to distinguish between the different Greek architectural orders, defined by the type of columns. In a secondary sense, style has long referred to the envelope or exterior that encases content; the latter is supposed to be the repository of the true meaning or nature of something. Due to an inversion brought about by digitalization, images are now said to be ‘content’, as opposed to the containers that disseminate them (websites, broadcasting platforms, and so on). Style and content are turned inside out here, like a glove that has been pulled off. Style is simultaneously image, content, interior and exterior.

Marrow is a plaster copy of a Renaissance work, the Transi from the Church of Saint Etienne in Bar-le-Duc. The flayed man seems to tell us something about the title of the exhibition, Smile and Say Time. He has had his time, and his smile has set in a rictus grin. Andersson has added a tesseract or hypercube – a mathematical object that can be described in simple terms as the geometric analogue of the square of a number, a squared cube, as it were – to the figure’s hand. This is illuminated by a beam of light that projects a shadow of a ‘simple’ cube on the wall at a studied angle, which is in line with theories about n dimensions and their representation, with each object casting a shadow of itself in n-1 dimensions.

The projection goes from the mind to the image, leaving open the hypothesis that we do not accurately perceive the dimension in which we are living, that is, that we do not perceive the fourth dimension in which we exist and of which our three-dimensional image is only the projected shadow. The hypothesis can of course be understood metaphorically, as it was for the anthropologist E.T. Hall: in The Hidden Dimension, he used this expression to refer to culture – the invisible additional dimension explaining our comprehension of the space in which we are living.

The image of the cube is projected onto a green background of a very specific shade, the one used in video editing for chroma key compositing – the abstract green background makes it easy to remove from behind the filmed subjects and substitute with any other background. The video equivalent of the blank page, this monochrome background, devoid of any image, is thus potentially applicable to all of them.

In Atomizer, a photograph is attached to a bar, giving the impression that it can rotate on itself. In the photograph, hands cling to an axis similar to the one supporting the print, as if they are struggling against a centrifugal force that is threatening to make them let go. The background of the image is a spectroscopic view of the sky.

The hands hold the bar like passengers on a public transport system that connects destinations light years apart. The combination of the bar, the points of light on the astronomical map and the potential rotation are also reminiscent of a scene in a nightclub.

Archaeology and astronomy have something in common: both study the past, since starlight or the ‘relic radiation’ of the universe takes millions, even billions of years to reach us. A kind of contemporary vanitas, Atomizer suggests the infinitesimal scale of our place in the universe, but also the brevity of our time in it, as aggregates of atoms liable to be dispersed throughout the immensity of the cosmos at any moment.

Each of the two works in this series (the other being Cache nr 25, 26, 27) is made of collaged – or rather laminated – images, with each layer separated by sheets of plexiglass.

The word ‘cache’ in the title refers to a type of computer memory. The data in the cache is stored according to how frequently it is used by the processor. Extending this analogy between human memory and computer memory, the collage suggests a set of images that are immediately available to the mind, images in reserve, ready to rise to the surface of our awareness.

Here, the superimposed images are of a young woman’s hands pollinating an orchid and a plane wreck in the background. Air disasters are one of the most common fears; their recurrent and sudden appearance in the media always triggers the most emotions. The combination of the two images is random, but the viewer can always find a logical thread that links them, such as the notion of hubris, which can be applied to the plane crash – just like one of the Greek myths most strongly rooted in our imagination, Icarus – as well as to the idea of the artificial creation of life, which is the subject of the other image.

This collage superimposes two images: that of a girl running on a beach, her face unrecognizable because it is pixelated, and that of the remains of a Greek temple. The composition simultaneously depicts two potential states of a substance: before erosion (the Doric columns) and after (the sand).

The pixelated face could be the result of a faulty memory – an image that loses resolution as the recollection of it fades. Running between the columns, the girl is one image among others, a digital image in its ‘natural’ environment, which is also gradually becoming ours. Our representation of antiquity, for example, is increasingly virtual: it is made up of all the reconstructions offered to us by contemporary museography, animated films, 3D renderings, multimedia immersion …

The twentieth century was the one in which the mass media took hold of our presentation formats – cinema, magazines, newspapers, advertising, and so on – which all provided the raw material for our imaginations. Now that this stream of consciousness is digitized both upstream and downstream, we can be sure that the machines themselves are already dreaming of pixels.

A chance encounter between a worn-out satellite dish and a dropper, the sculpture’s title (Fountain) refers to a famous found object. The reutilization of ready-made objects is widespread in contemporary art, but finding objects is also part of the daily life of archaeologists. Fountain mixes these two worlds. The satellite dish looks like an archaeological relic, and as such the work perpetuates a classic theme in science fiction: speculation about what will be left of our civilization in the distant future.

Here, the horizontal placement of the satellite dish and its rusty appearance not only make it look like it is out of use, but also project it into a future where its very function might be incomprehensible. As they become obsolete, old objects often find an ornamental function; this happens all the more easily when their purpose has been lost, or when their meaning escapes us completely. Wells become flowerbeds; agricultural tools become ornaments … A similar fate could indeed be reserved for satellite dishes of this type in the distant future. 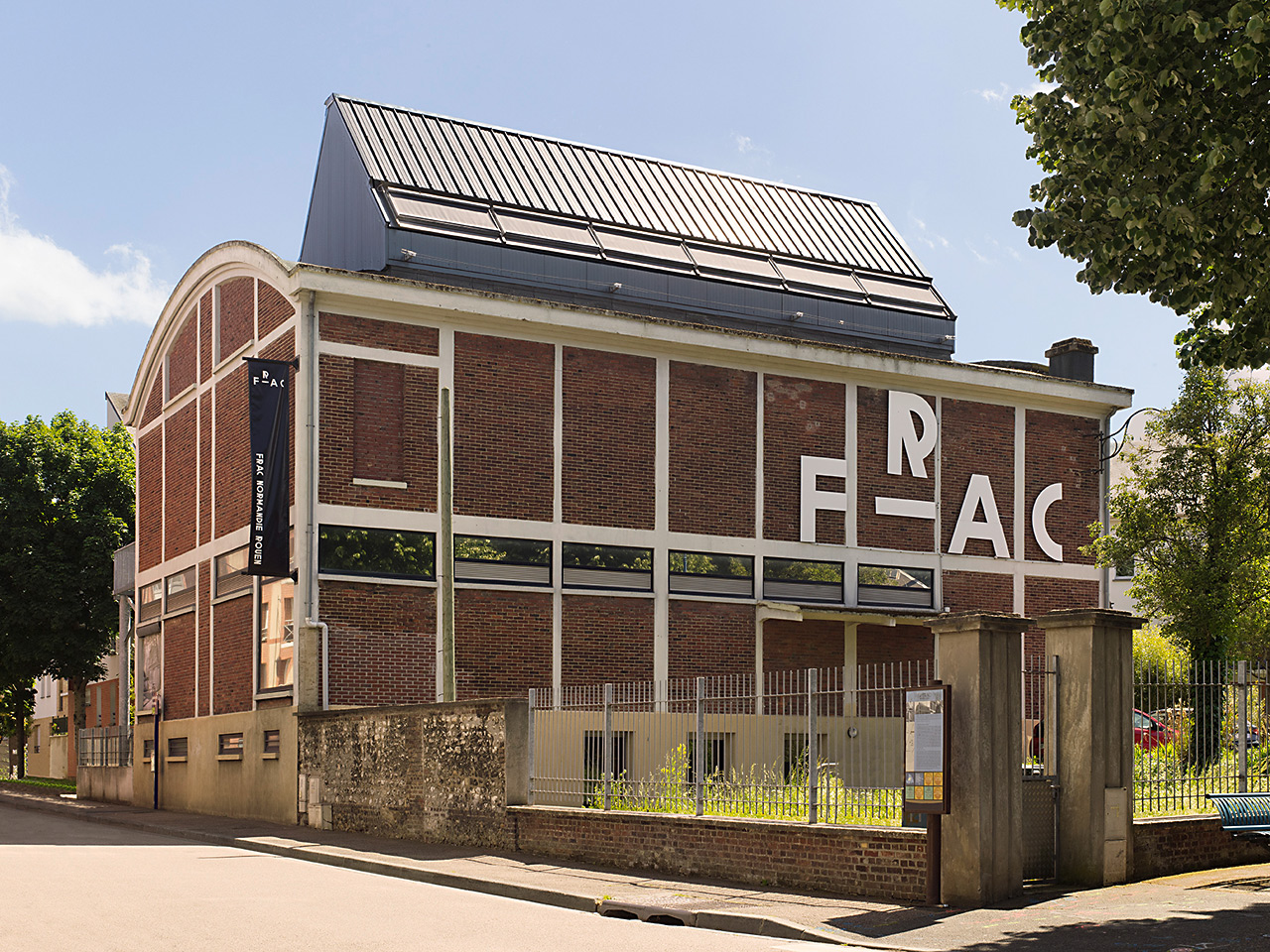 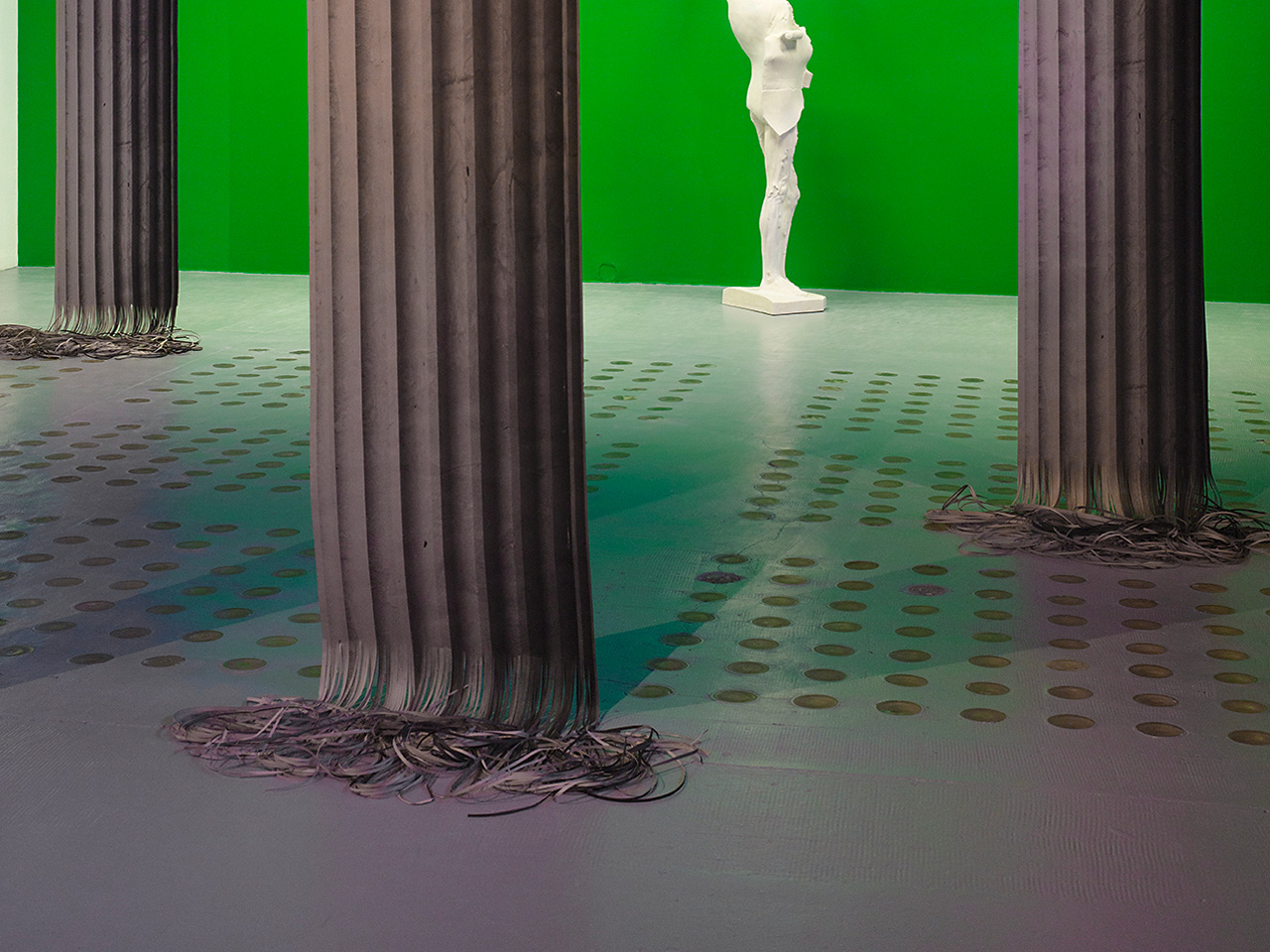 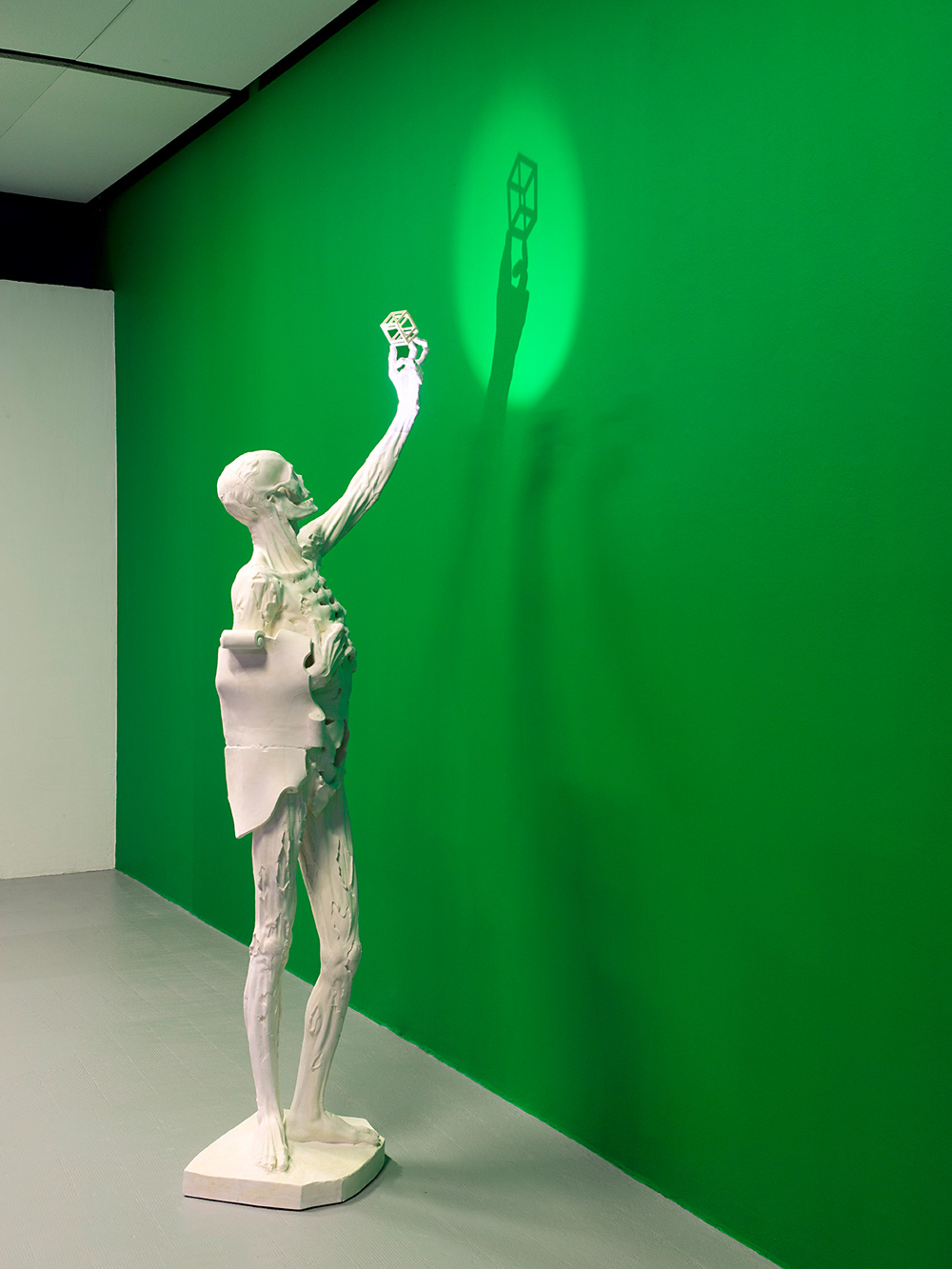 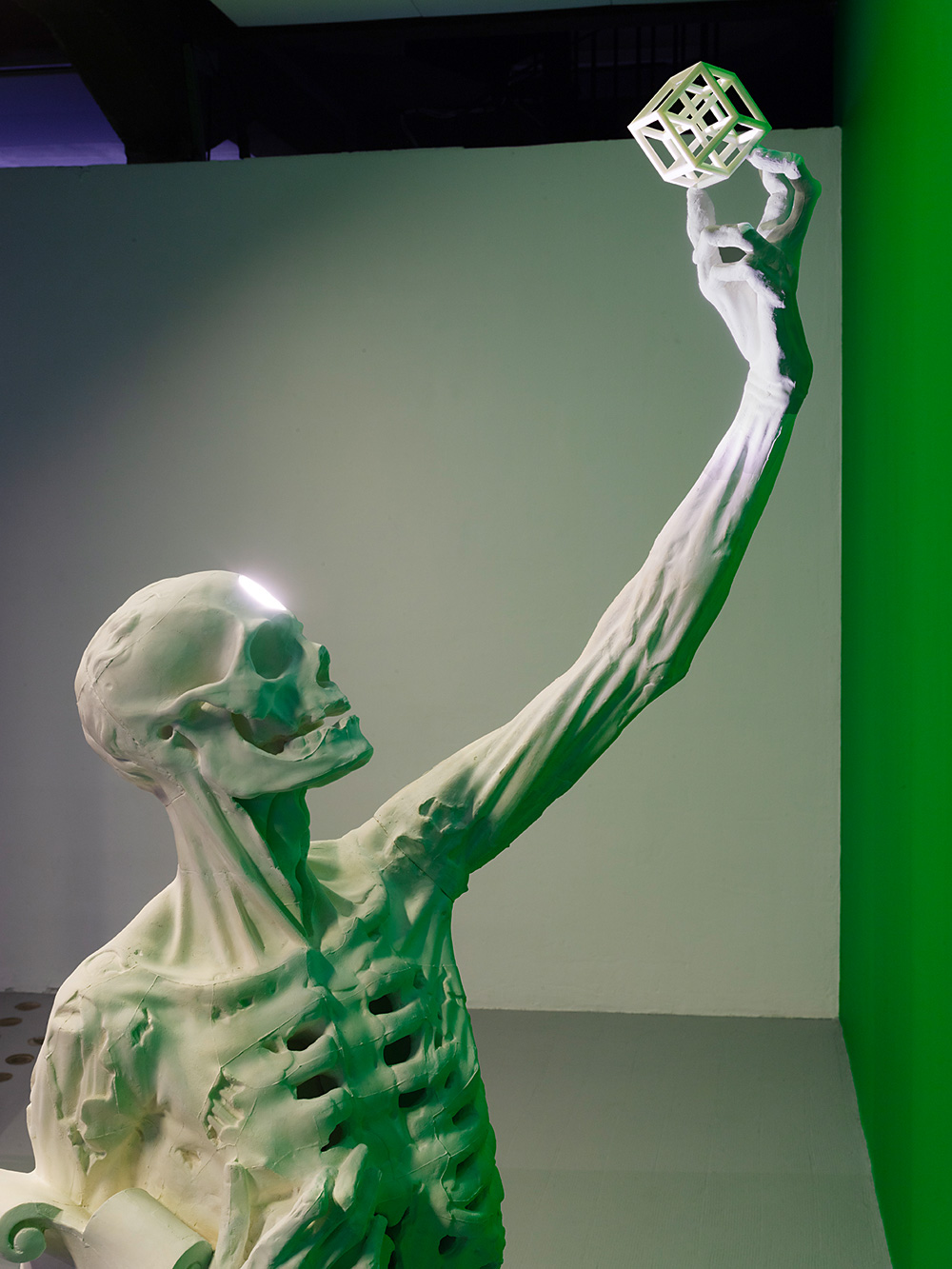 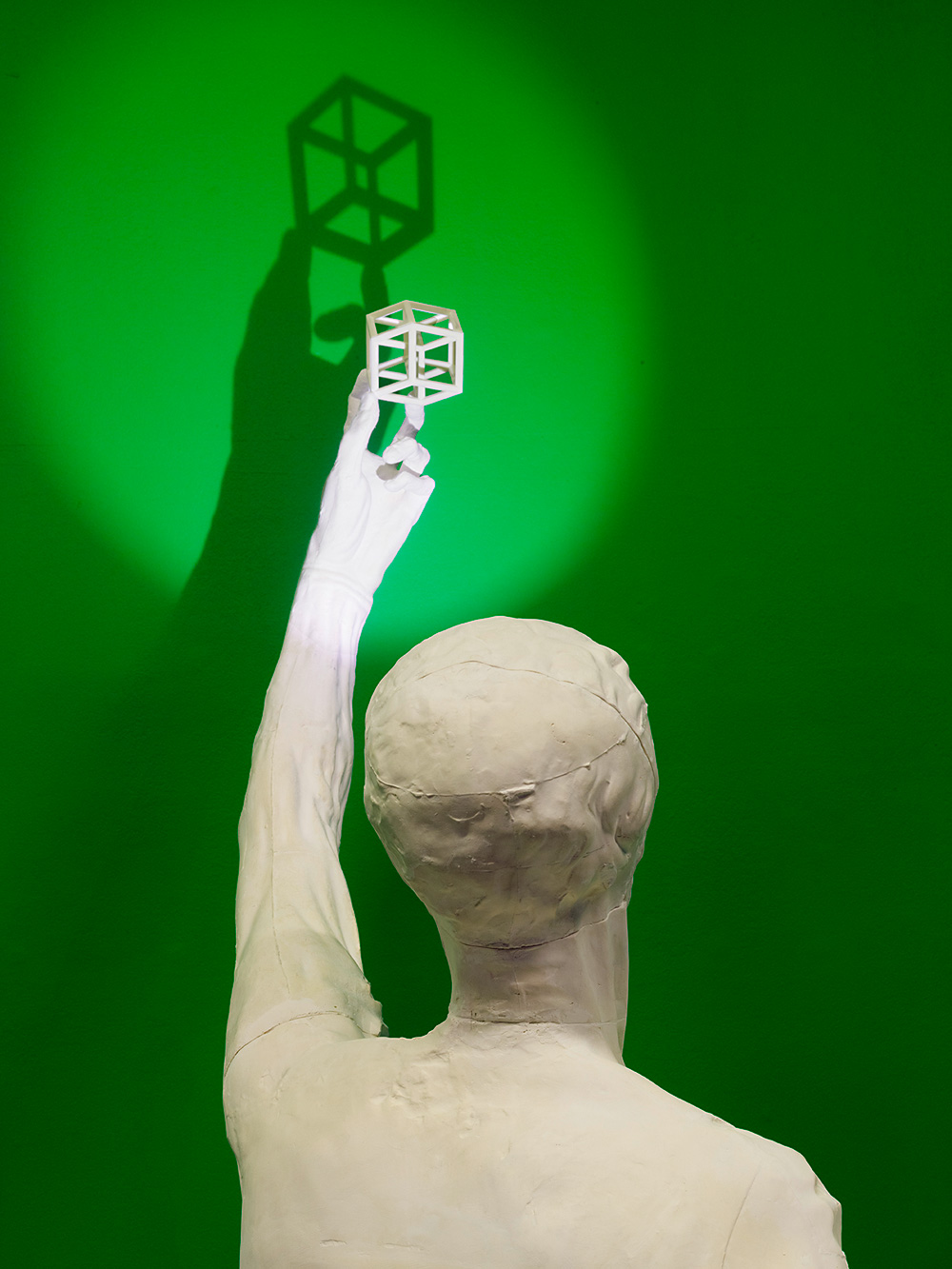 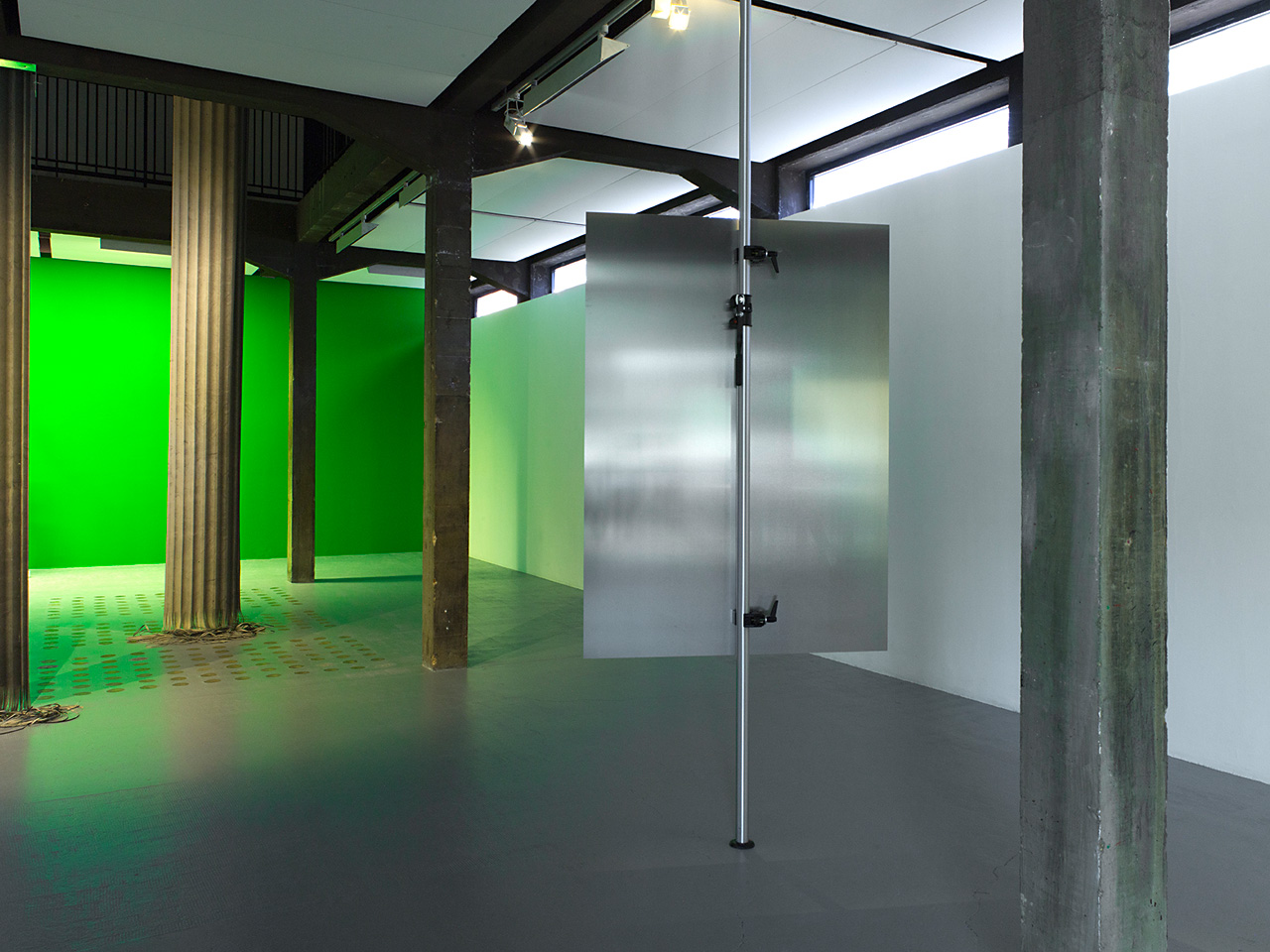 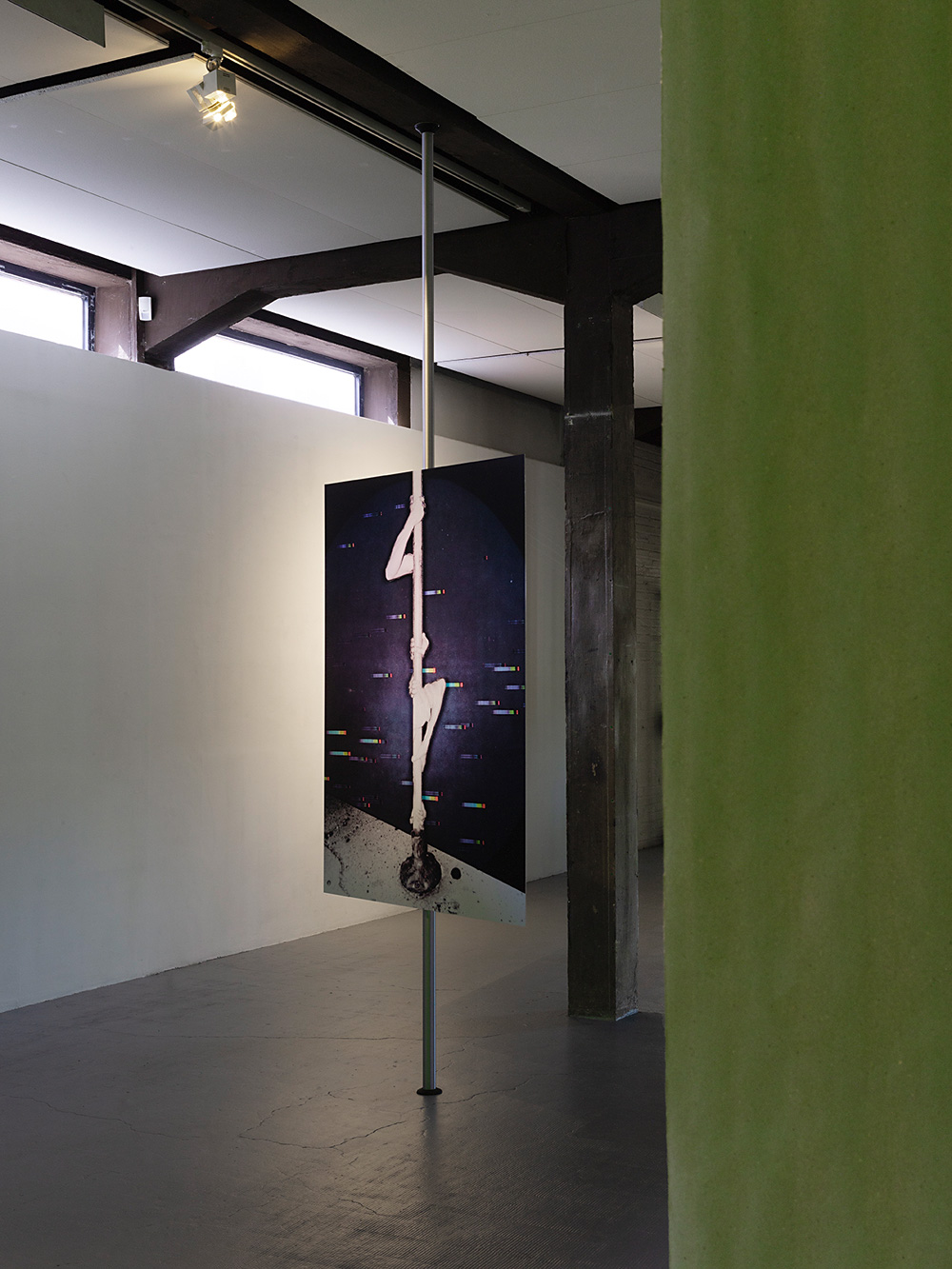 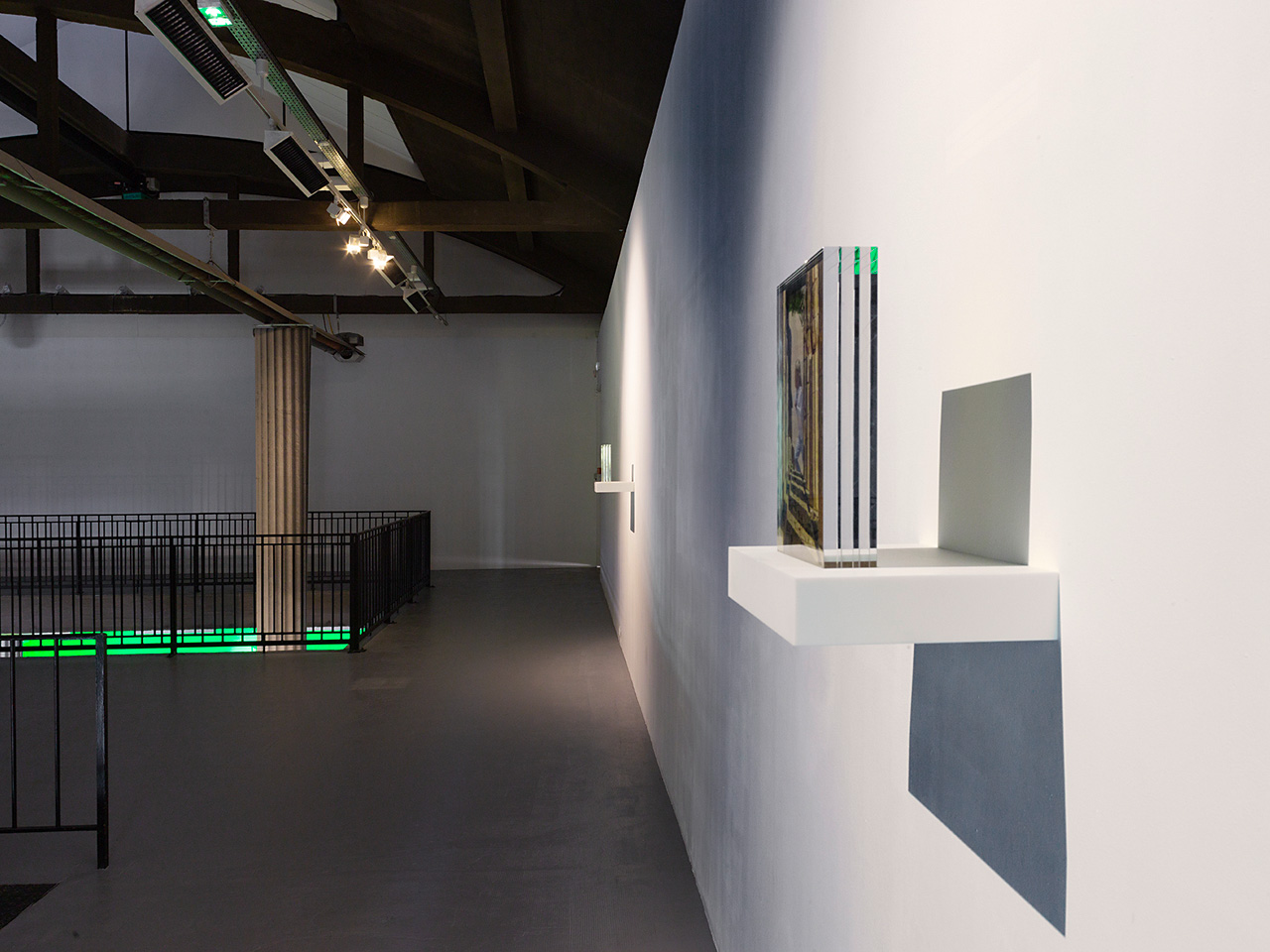 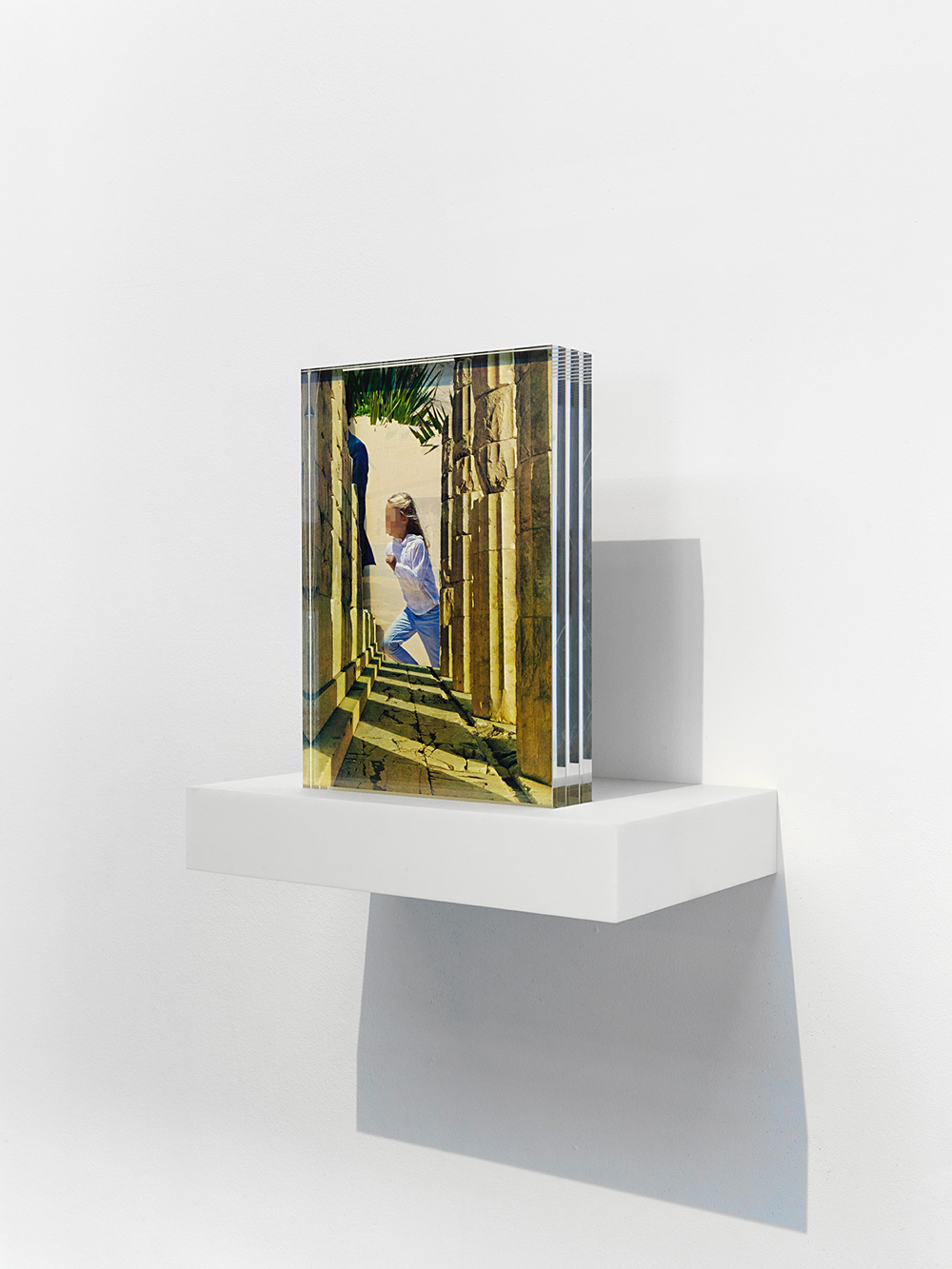 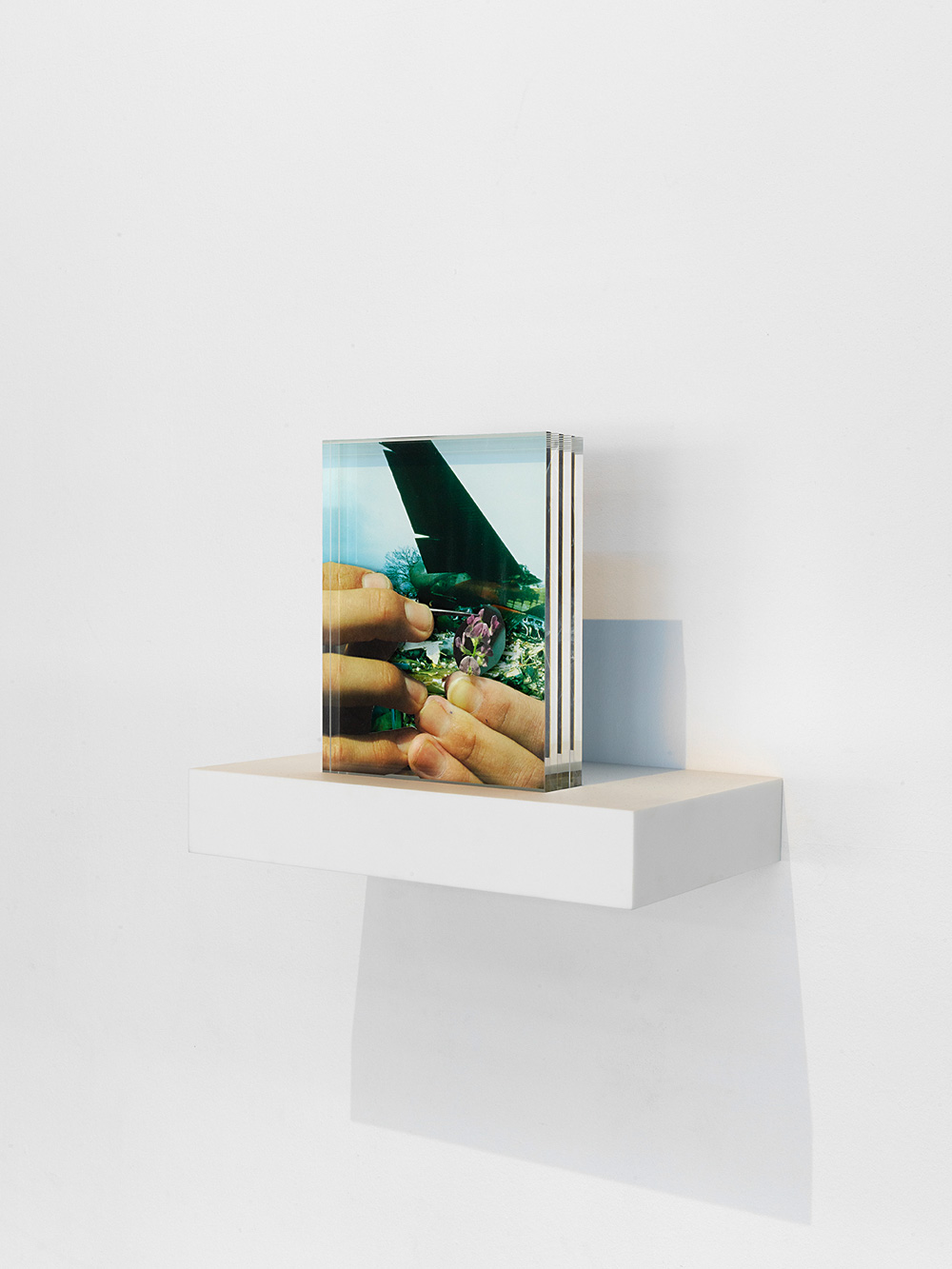 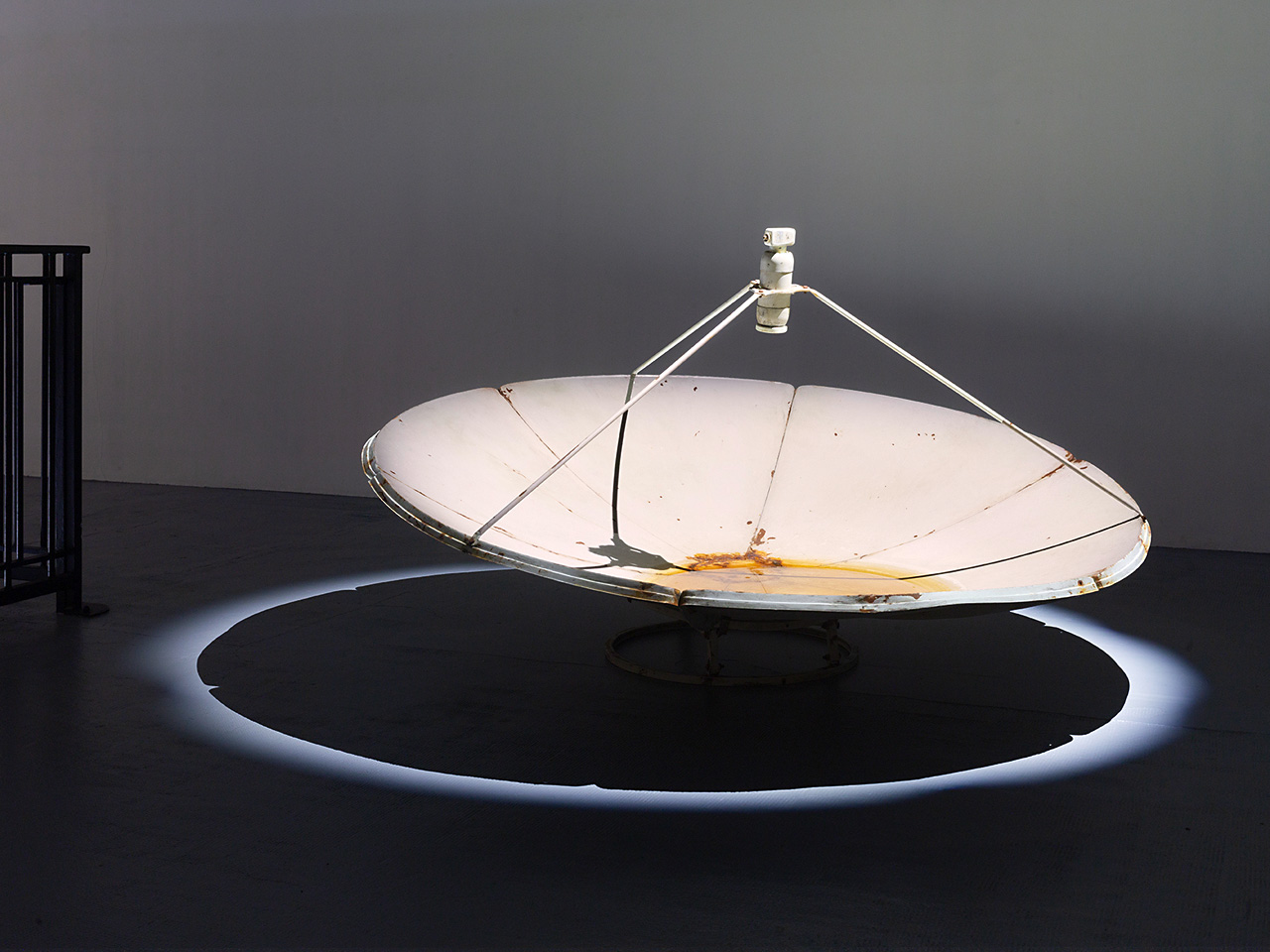 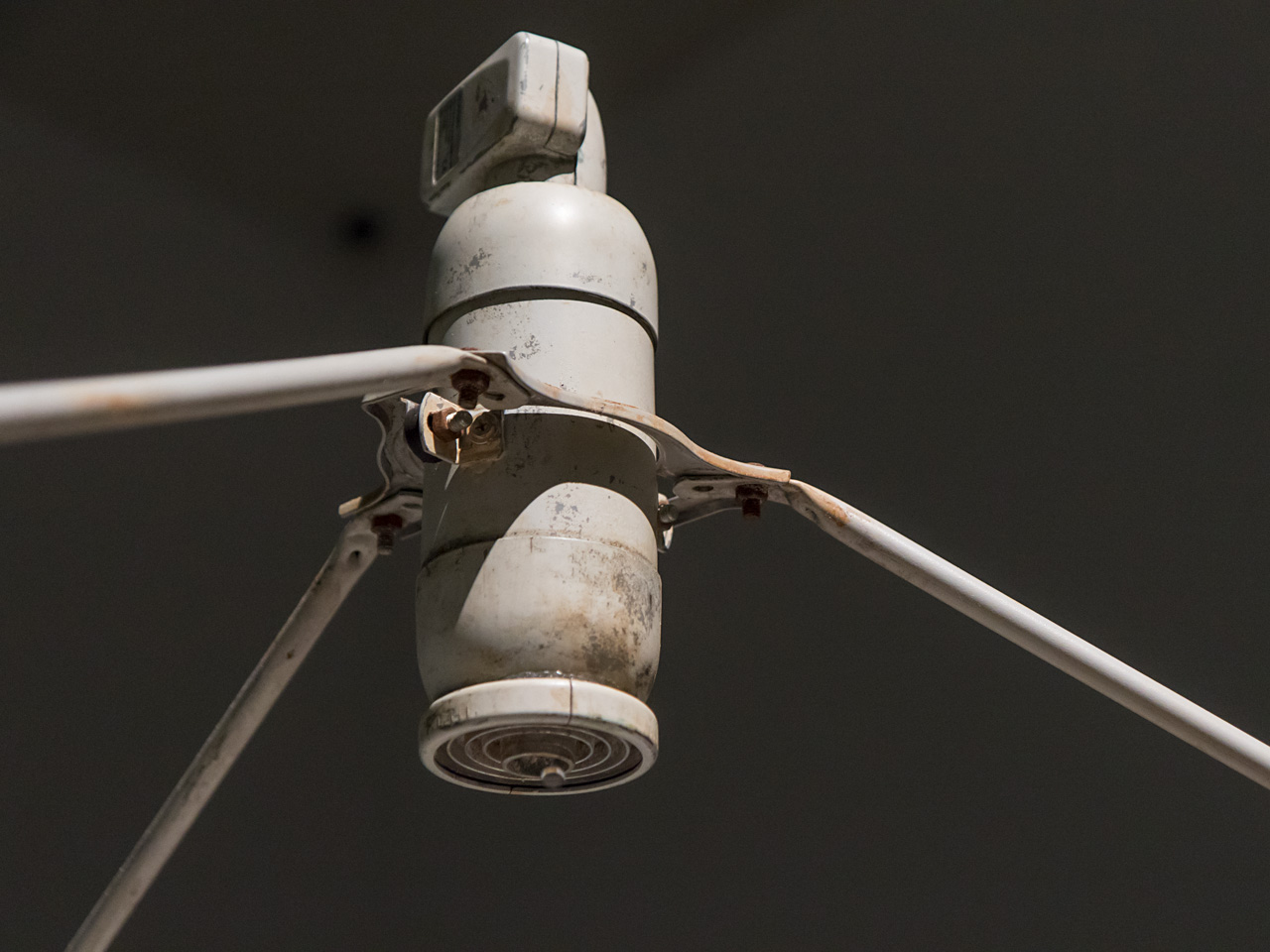 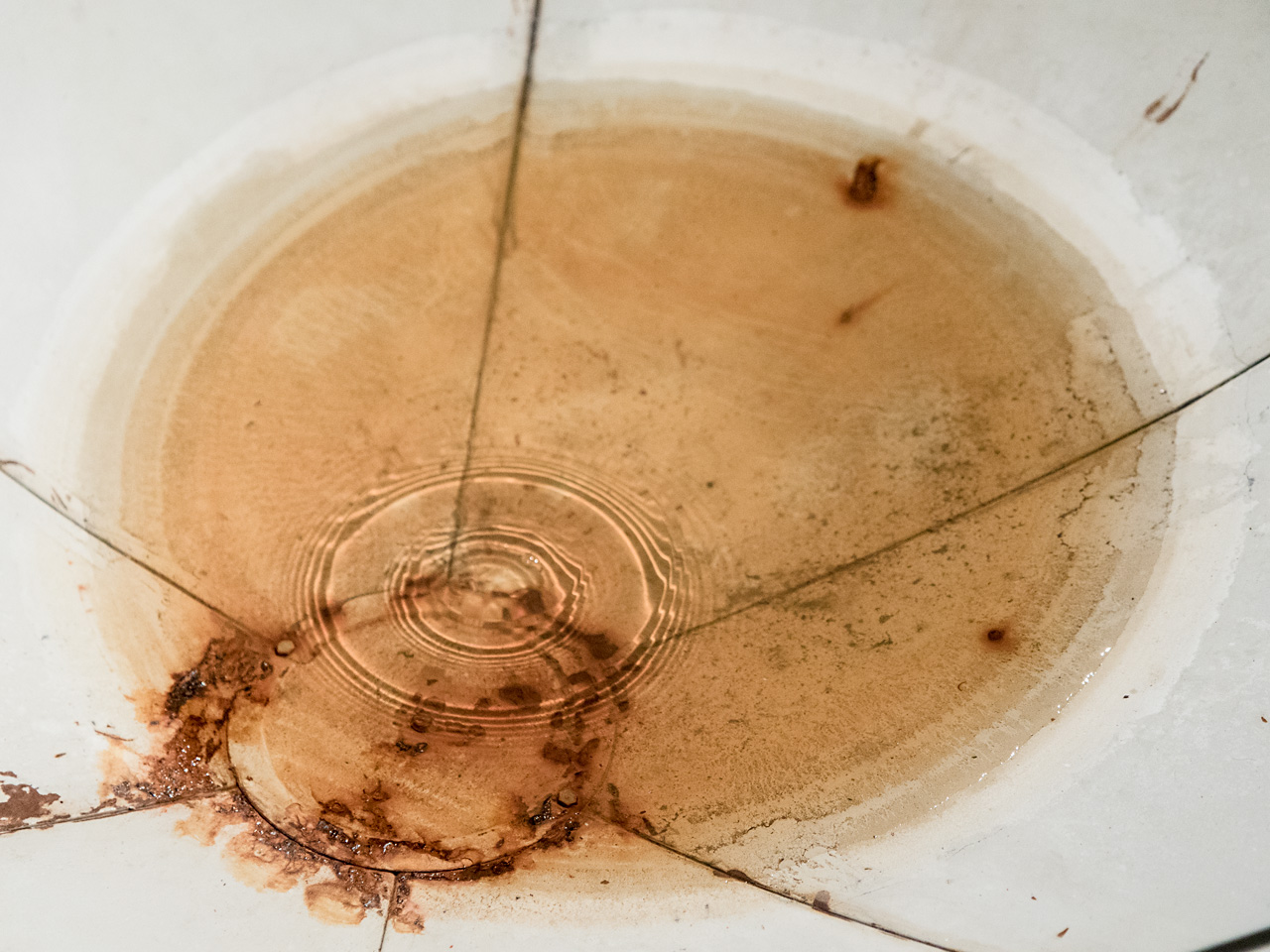