Inside the cargo space of a van a projector is showing a looped 16mm film clip from the post-apocalyptic movie On the Beach (1959). The scene presents one of the film's characters entering an abandoned office to find that an empty, overturned Coca-Cola bottle is beating irregularly against a telegraph transmitter. The hard-to-interpret signals that the protagonist of the film is trying to find the source of have thus arisen of a soft-drink bottle. From the front of the van a projection flows out of its headlights: an abstract, imaginary ruin is passing by. However, if the viewer looks closer to the image source – the headlights – one can see what is displayed: a series of Coca-Cola bottles appearing as columns as they slide by the headlights' glass in an endless row. It is as if the information from the film loop is being projected through the car and on the way having its information altered. The wall in front of the vehicle is being transformed into a second layer of code: an abstract rhythmic pattern of light, yet another message waiting to be decoded.

If you wish to make an apple pie from scratch, you must first invent the universe

For The Great and Secret Show at Von Bartha Garage in Basel (2012) Christian Andersson let the visitors begin in what could be a traditional showroom in a commercial gallery. Here they encountered the works of artists such as Venet and Morelet – who already have their place in modern art history – and then in the second gallery room discovered a number of works by Andersson himself. These works all allude to the subconscious referencing both the Rorschach test and dual personalities. There were also clear references to popular culture in the form of comic books and a keen interest in the role of chance in the process of decision making.

To enter the innermost room of the exhibition the viewer negotiated a PVC curtain reminiscent of a garage. Amongst crates normally used to transport artworks, stood a white Volkswagen van dating from 1990 with the headlights turned on. The work has at the same time the concrete and uncanny title White Van (2012). Above the glove compartment by the passenger seat the observant visitor could see a copy of the horror writer Clive Barker's The Great and Secret Show (1989). Suddenly, it was hard to understand what really was Christian Andersson's exhibition and what was scenographic props or perhaps a normally private section of the gallery. The front headlights also projected a video loop showing a drive through a snowstorm at night – viewed from the driver's perspective. Andersson creates confusion in the exhibition and perhaps doubt in the viewer. What story is being told? What is the exhibition? What is fact and what is fiction? The Great and Secret Show is a slightly skewed version of a traditional art exhibition, activating the title White Van as an allusion to the "white cube" and its connotations.

Christian Andersson's exhibition From Lucy with love at Moderna Museet Malmö (2011) offered an anachronistic historical perspective. The exhibition's title work consists of a long industrial shelving unit that seems to function as a contemporary cabinet of curiosities and an incomplete timeline. The modern desire to categorize and understand reality disintegrates through Andersson's personal view of history, which challenges prevailing facts and truths. At the far end of the shelf a 16mm projector is showing a short film clip from the post-apocalyptic movie On the Beach (1959). The scene shows one of the film's characters – dressed in a protective suit – entering an abandoned office to find that an overturned Coca-Cola bottle is beating irregularly against a telegraph transmitter. The hard-to-interpret signals that the protagonist of the film is trying to find the source of have thus arisen of a soft drink bottle. The man's resignation behind the safety visor can't be mistaken when he discovers that the human sender does not exist.

For the exhibition Contemporary Archaeology Christian Andersson returns both to the white van and the film clip from On the Beach. In the new work – entitled If you wish to make an apple pie from scratch, you must first invent the universe – the viewer now sees the film clip screened in the back of the white van. The title – a quote from astronomer and science populariser Carl Sagan – highlights for Andersson the importance of the impossibility to experience anything in isolation from its immediate environment of current ideology and economic and political climate. As with White Van an unclear projection flows out of the headlights, but this time it is not a snowstorm. Instead, it is a fictional wasteland; an imaginary ruin is passing by. Visible on the wall is not much more than a blurry message waiting to be decoded. However, if the viewer looks closer to the film's source – the headlights – one can see what is displayed: filmed from the driver's perspective a series of Coca-Cola bottles appearing as columns are passed by. The bottles have been transformed into a modern ruin and an architectural element with the purpose of supporting a building. What at first glance can be traced to a critique of consumption is rather a question and discussion of today's iconic symbols and images. Andersson's work highlights the archaeological choices we are constantly forced to make in the search for the 'new truth'. It simultaneously speaks of our fascination for the unknown, and the position of the ruin within contemporary art.

With his new work Christian Andersson manoeuvres between the past and the future. The clip from On the Beach operates as a starting point for the journey to an unknown destination. The van acts as a carrier and encoder for the signals. The artist refers to the van in the work as a lab – maybe it's actually his own studio – and inside can be found scattered 'clues' and source materials: for example, old issues of National Geographic, Coca-Cola bottles, the book On the Beach, a book by Carl Sagan... All these items, along with the footage shown, leads the viewer at the same time both closer to and further away from the story and the outcome becomes more and more blurred. The core of truth and hard facts that is the foundation of positivist science seems even more absent and even largely unjustified.

Christian Andersson's work is for me a search based on an interest in historical phenomena, events and unsubstantiated theories. In his research, empirical facts and fictional stories are treated equally as to what they can say about ourselves, and the world we live in today. But above all, it is probably uncertainty about the upcoming future, and an awareness that everything is based on existing ideas and knowledge, that really interests Christian Andersson and informs his work.

Andreas Nilsson is a curator at Moderna Museet Malmö.
The essay was first published in the exhibition catalogue Arqueológica, Matadero, Madrid (2013). 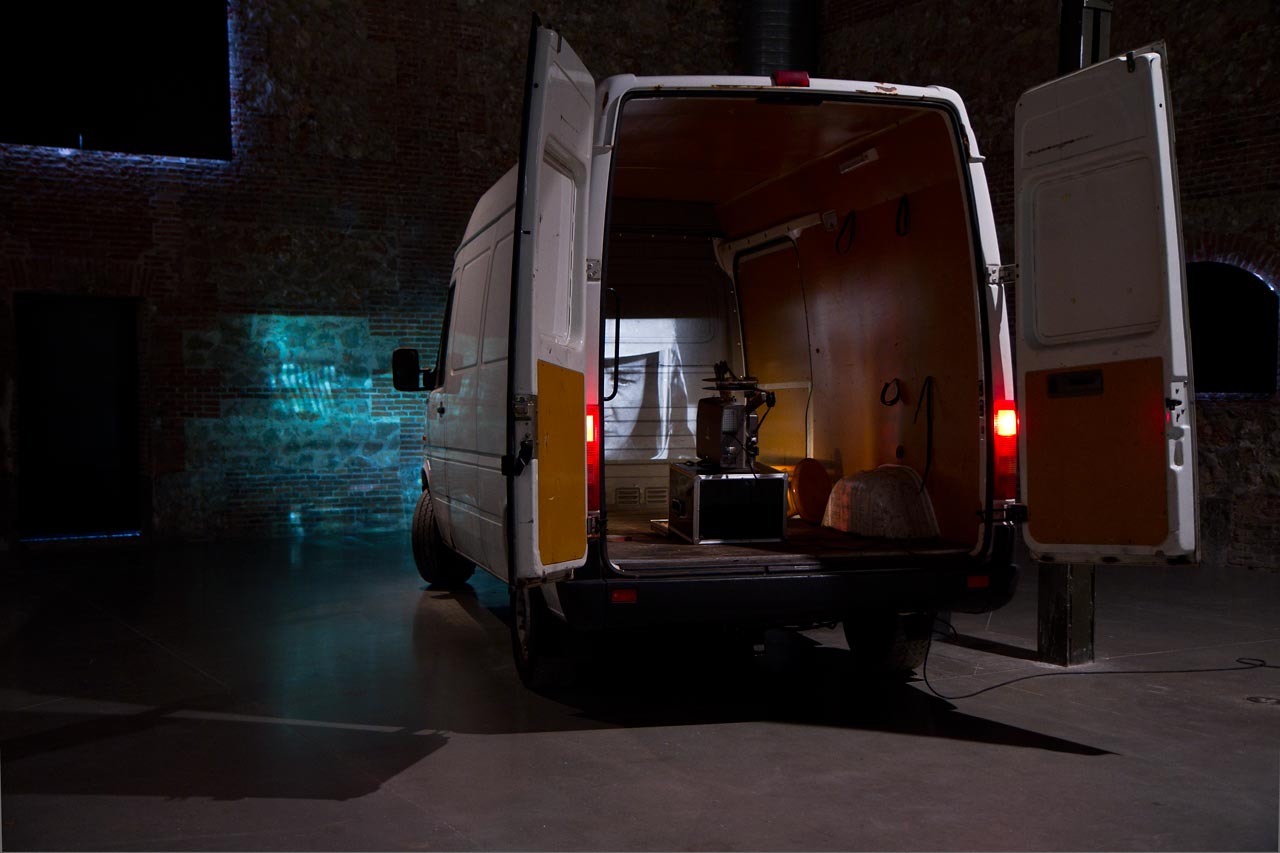 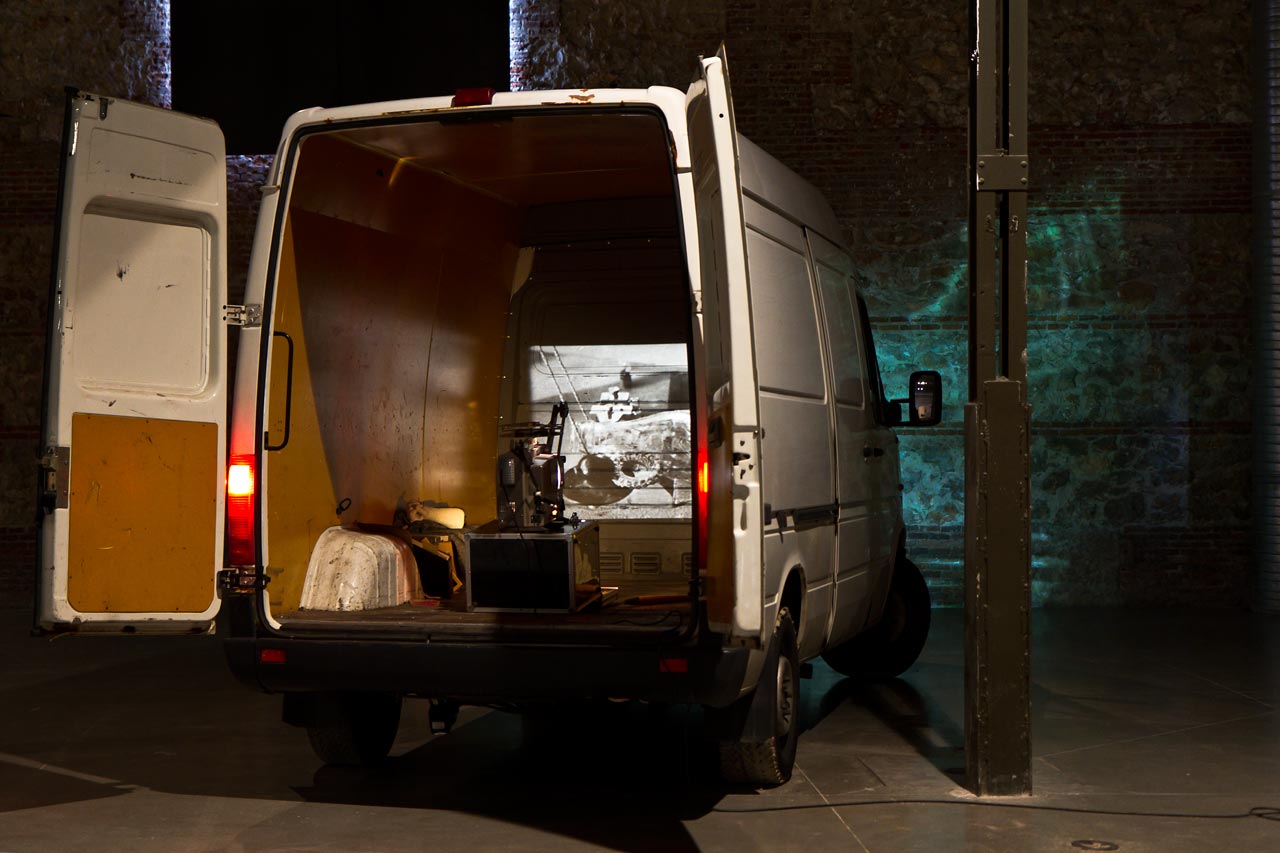 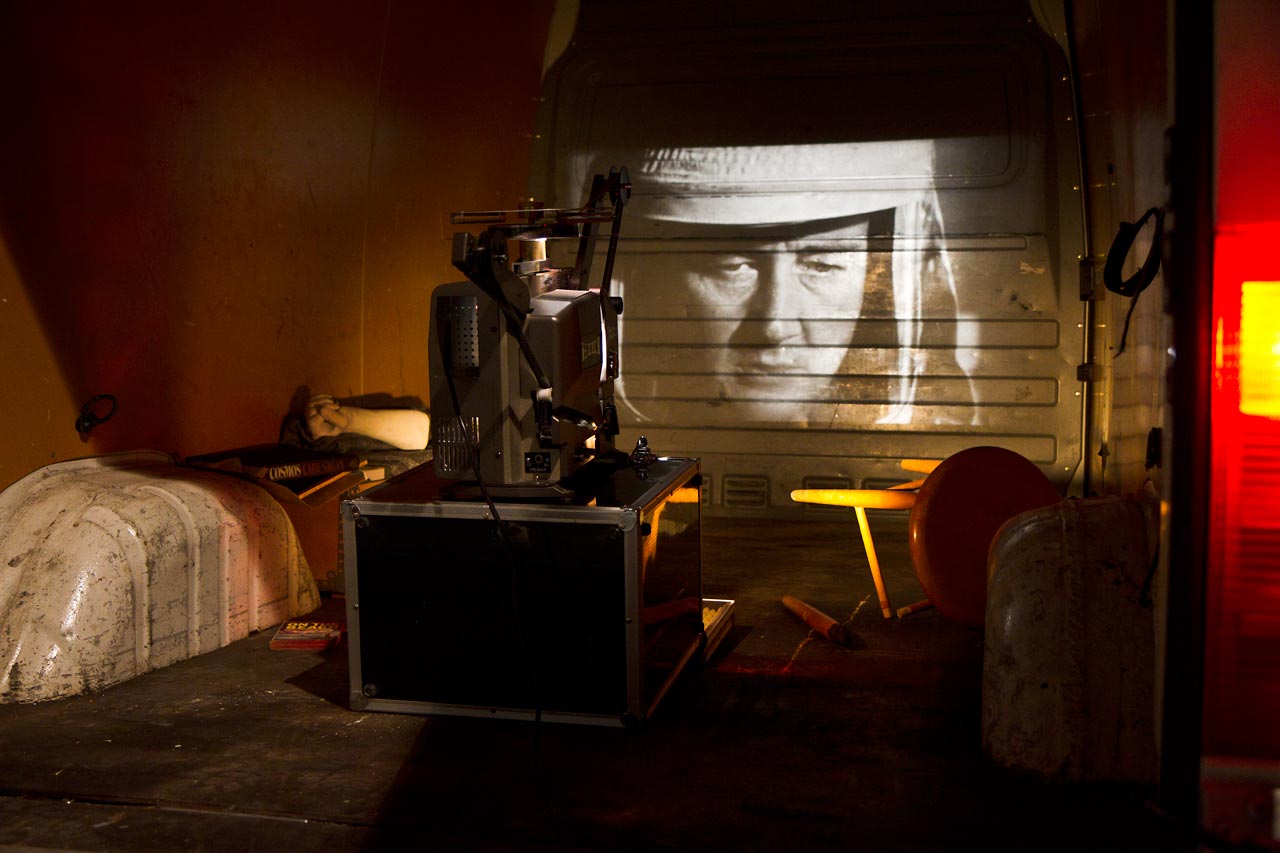 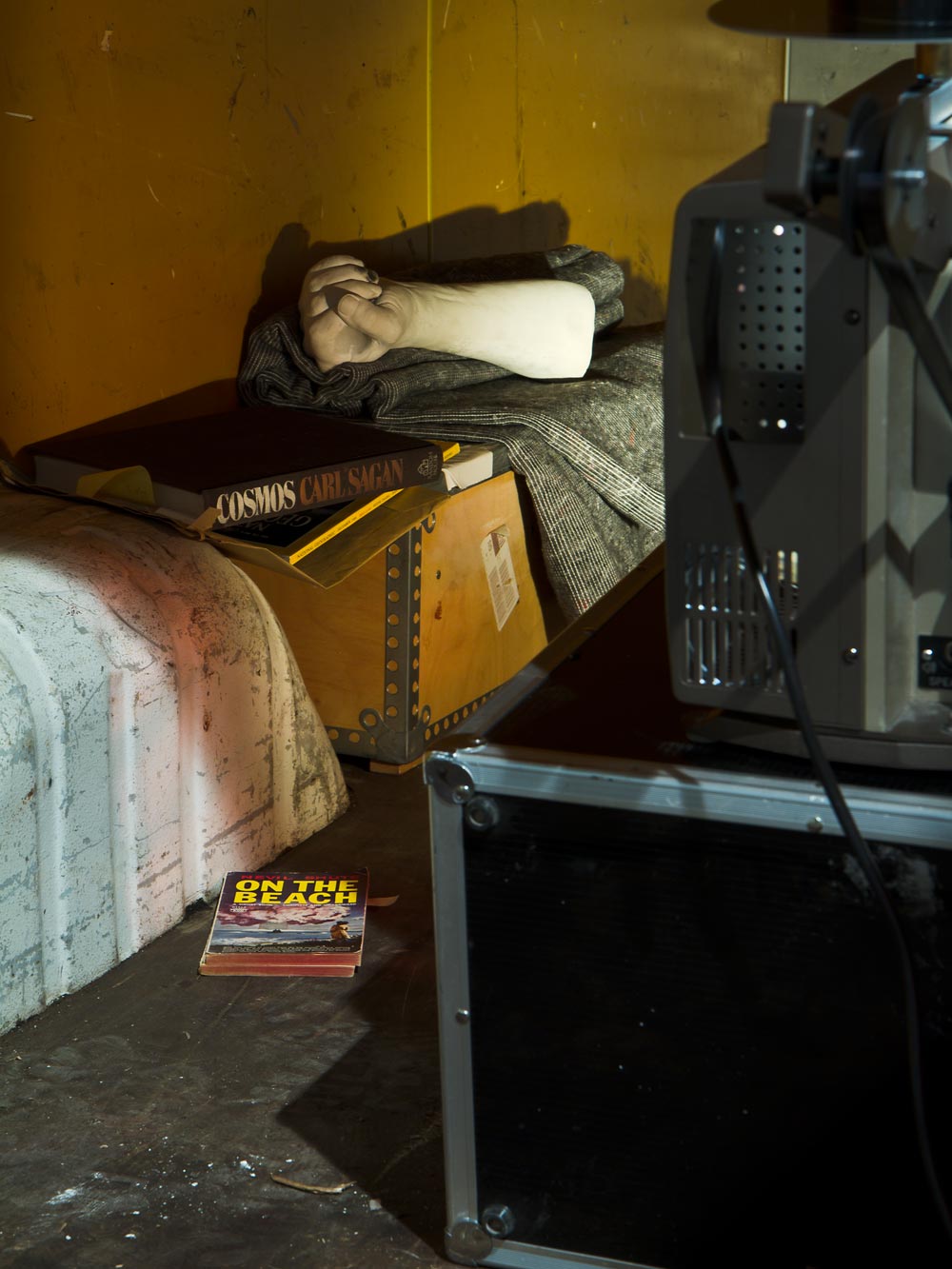 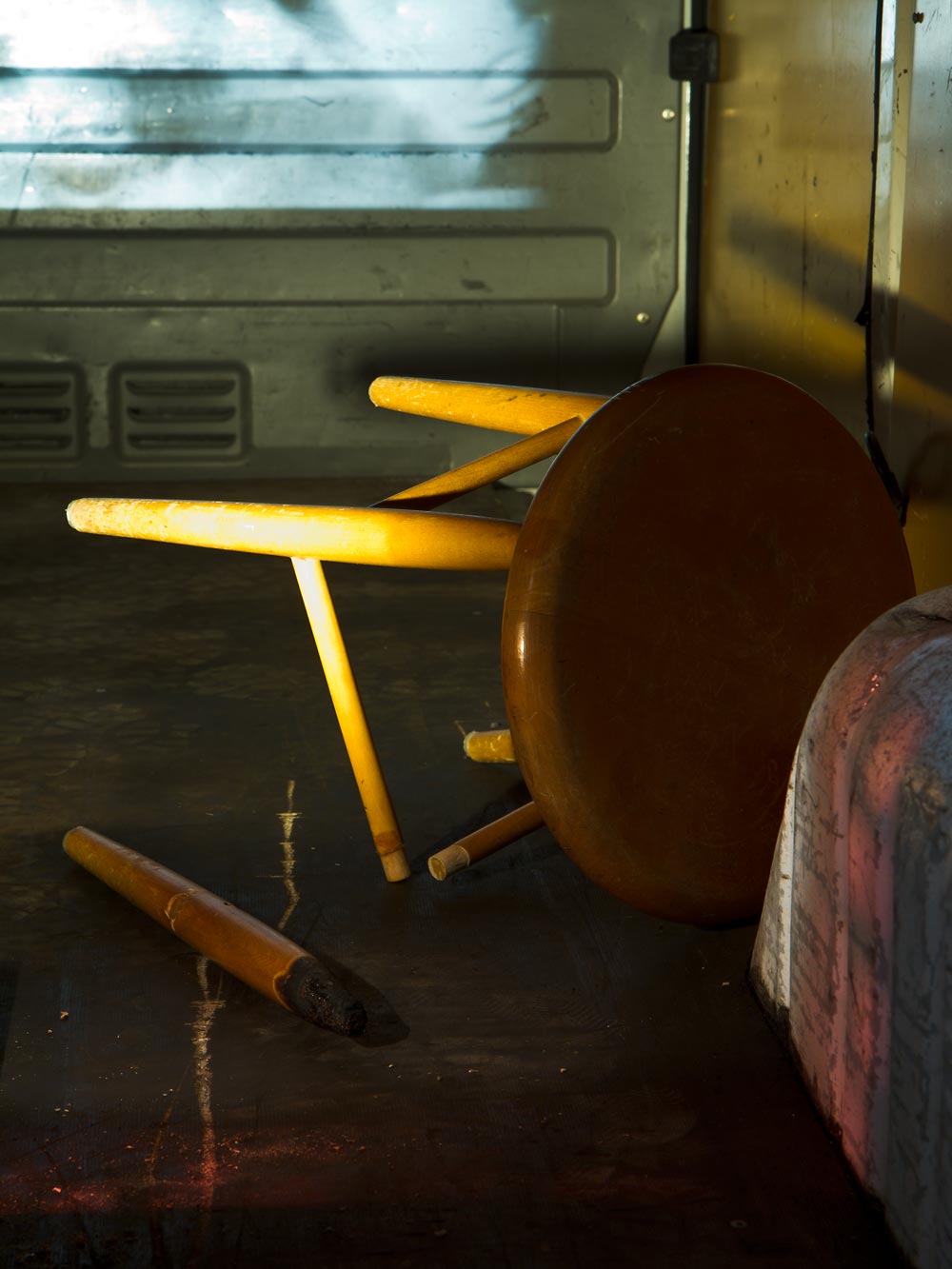 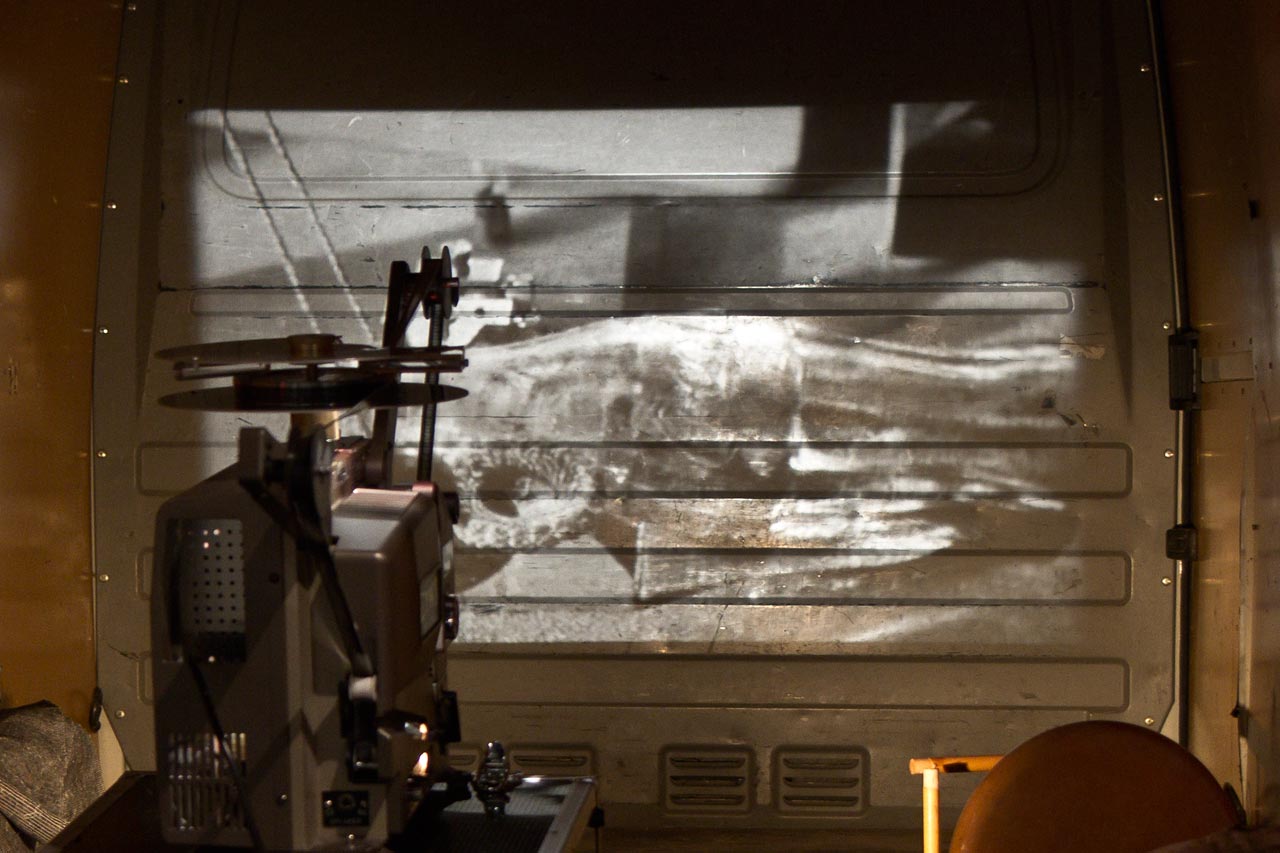 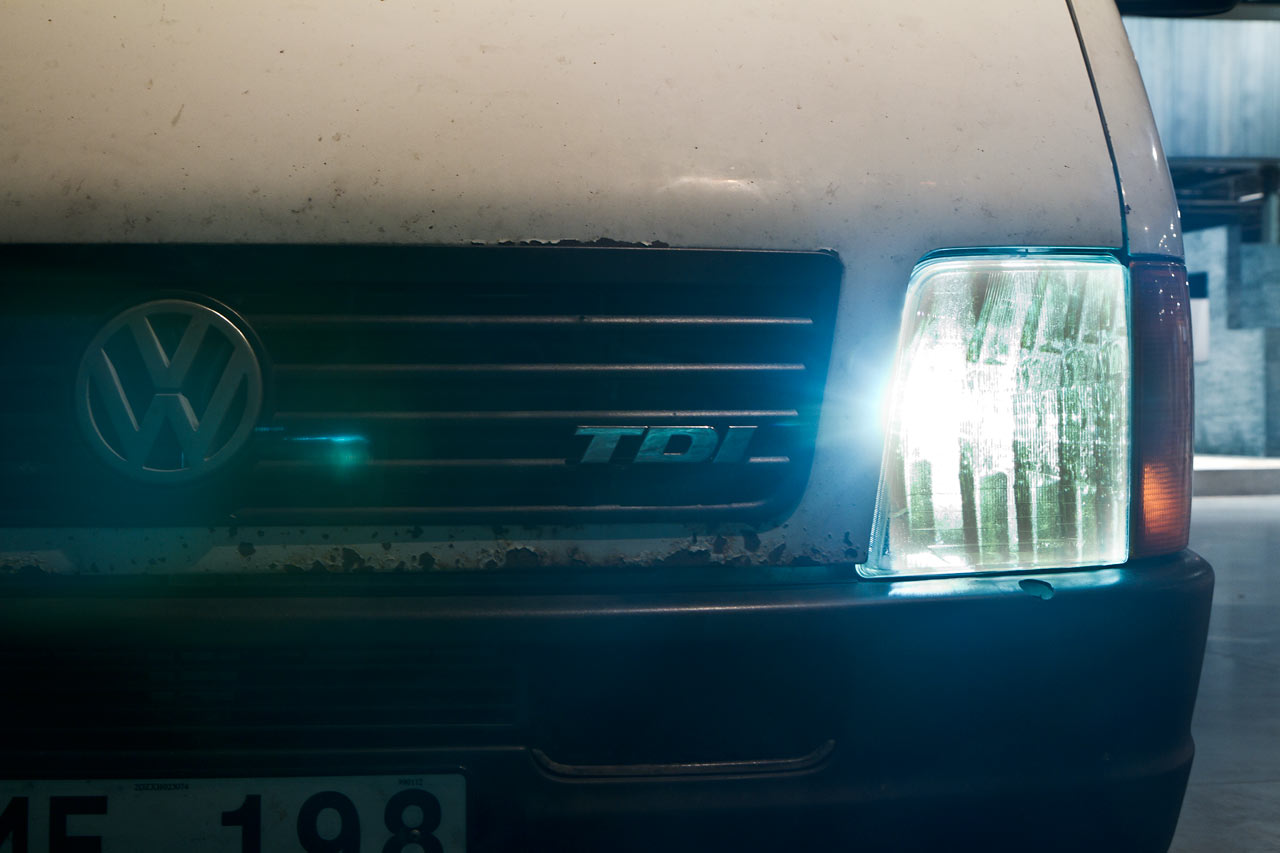 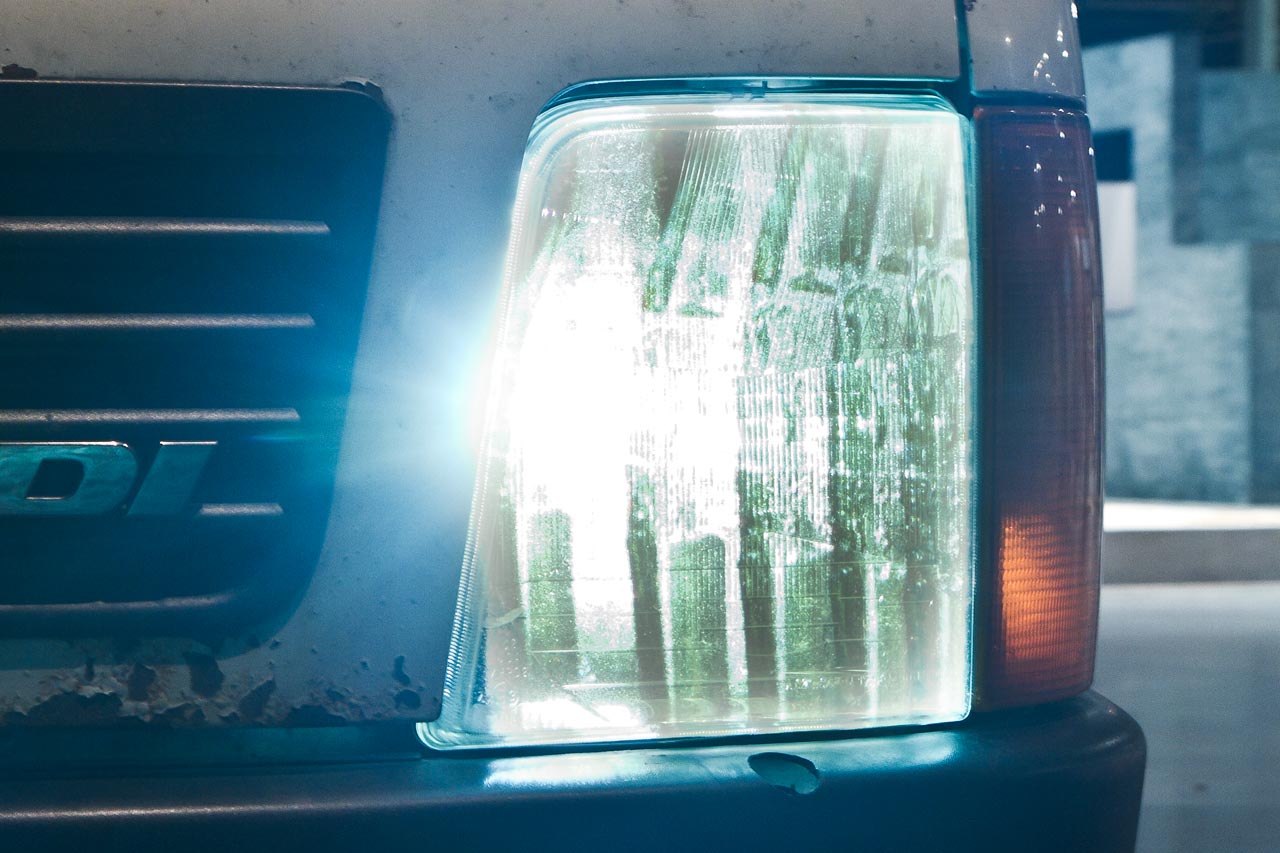